HISTORY OF HMS BOUNTY AND ITS JOLLY BOAT: THE RIOT OF ITS CREW

Discover the HMS Bounty Jolly Boat, wooden model of the boat in which William Bligh was shipped with 18 loyal sailors after the riot of its crew of the HMS Bounty.

In December 1787, HMS Bounty left England bound for Haiti to transport bread trees to the Caribbean, a great storm which forced them to change course, arriving in Haiti with months of delay. This delay forced them to remain on the island several months until it was again possible to collect the shoots from the bread tree. During this period, the crew became habituated to the customs of the natives and established relations with women of Haiti, almost forgetting their condition of English sailors.

After many difficulties on the part of Bligh to reimpose the discipline undertook trip the 4 of April of 1789, producing the mutiny 24 days later. Bligh sailed more than 3,500 nautical miles for 47 days until he arrived to the port of the Dutch colony of Coupang, losing only one of his men on the voyage.

The modeling kit contains high precision laser-cut board parts, fine woods, brass, cast iron and cotton sails ready to be placed. Guided by our detailed step-by-step instructions on DVD -PC and MAC- you can complete your replica or scale model of this navigation legend. The kit does not include printed instructions. You can also download the digital instructions for free on the button on this product sheet called 'Instructions and Downloadable Contents'.

Accompany the Jolly Boat with its own mother ship, the merchant vessel HMS Bounty. 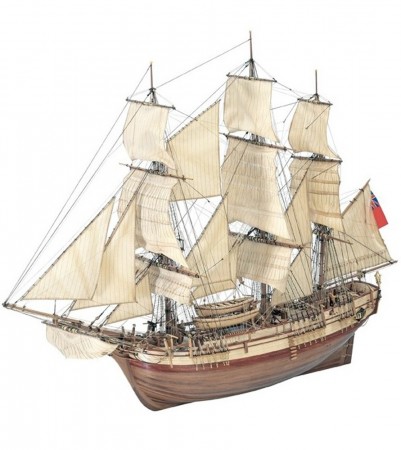 Build the wooden model of the HMS Bounty ship. The 1:48 scale model of the British frigate from the 18th century, an emblem of independence from the United States, is aimed at expert modelers. The model ship kit includes all the parts to complete this mag